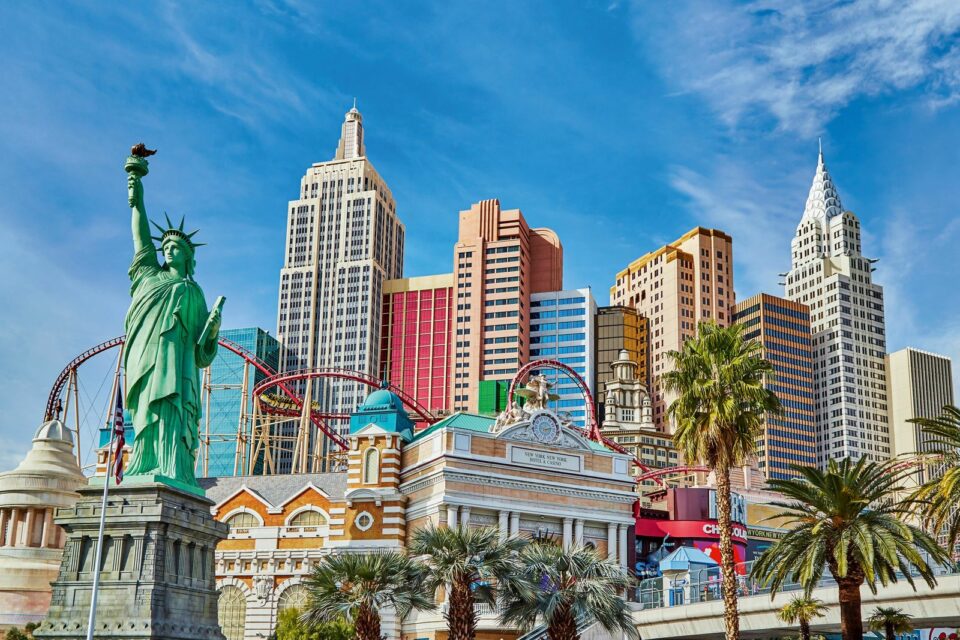 
Cruise The Strip at night: Where else can you find a pyramid-shaped hotel shooting a beam of light into space, a shimmering, half-size Eiffel Tower and a thousand dancing, lit-up fountains, all within a four-mile stroll? Join the throngs for the must-see, most Vegasy part of Vegas: the Strip. The bridge linking the MGM Grand and New York-New York Hotel & Casino has some of the best views over the cacophony of neon lights. Next, weave through audacious, air-conditioned casinos where slot machines chortle and ping, snapping photos with costumed staff – from feather-clad dancers to Roman legionaries.

See a show: There’s always something new on (Katy Perry, Sting and Usher are some of the musicians set to perform this summer), but there are classic residencies, too: opt for magician Criss Angel or the Blue Man Group for an evening to remember. The five Cirque du Soleil shows currently playing, each at a different resort, are unique to Vegas, with over-the-top, water-based O being the hottest ticket.

Experience Fremont Street: North of the Strip in Downtown, this is the original gambling district – and it could easily feel like a 1970s time capsule but for that fact the world’s largest (1,500ft long) video screen serves as a canopy, covering all five blocks. The gambling and entertainment hub capitalizes on the wide seedy roots: here, electric guitar players busk next to lingerie-clad women holding signs proclaiming ‘dances for cigarettes and vodka’. Continue east, and you’ll come to the open-air section of the street, the Fremont East District, which brims with bars and restaurants.

Explore AREA15: Discover alternate universes at this vast, immersive entertainment zone. They include Omega Mart, a ‘supermarket’ where a fridge leads to an alien world of slides and staircases. Expand your mind in the mirror rooms of Wink World, or head to Lost Spirits Distillery, where an immersive distillery tour takes you through a recreation of 19th-century London. Next door, newly opened Illuminarium offers virtual safaris, undersea adventures and more, via ‘video transport technology’.

Visit ‘foreign cities’: Las Vegas serves up the European dream in spades. Crooning gondoliers paddle punters past a replica Saint Mark’s Square at The Venetian Las Vegas, while at the new Vanderpump à Paris restaurant at the Paris Las Vegas hotel, settle into a beautiful epoch sofa for cocktails served in Louvre Pyramid-shaped glasses. You can also time travel: sample ancient Rome at Caesars Palace, or the era of the Egyptian pharaohs at the Luxor Hotel & Casino. For a conceptual hop across the US, grab a drink at a corner bar off Times Square at the New York-New York Hotel & Casino.


Day trip to the Hoover Dam: This 726ft-high dam provides electricity to around 1.3 million households. Visit the Boulder City-Hoover Dam Museum before taking a tour of the inner workings of this engineering masterpiece. Adjacent Lake Mead has myriad tours, from cruises on a Mississippi-style paddle steamer to kayaking. It’s all a 40-minute drive from the Strip.

THE HISTORY OF ONLINE CASINOS IN ITALY