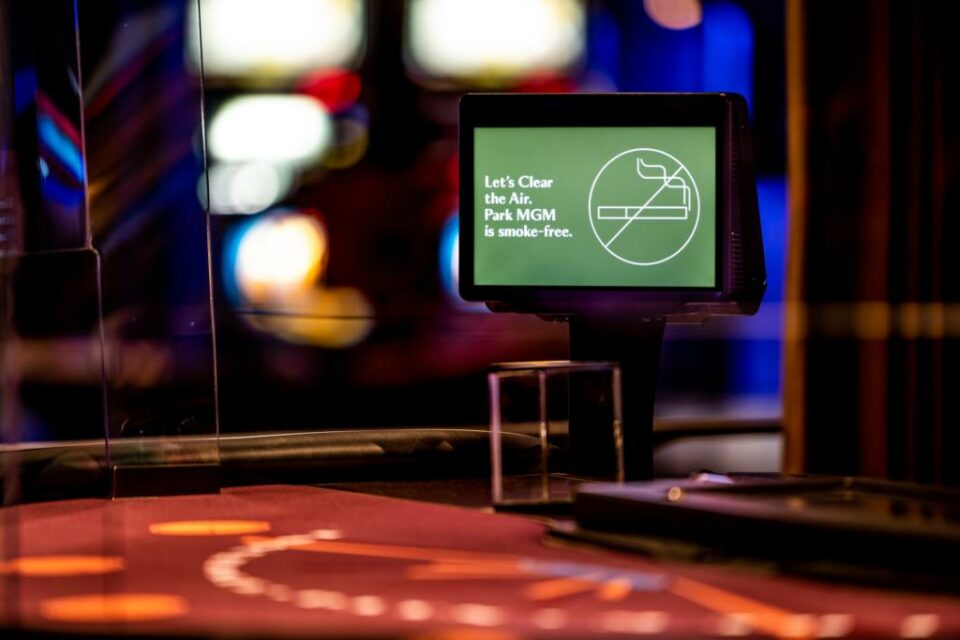 New Jersey legislation that would ban smoking inside Atlantic City casinos has led to competing research about whether such action by state lawmakers would further destroy the Boardwalk’s gaming revenue.

The heated debate has largely been ignored in Nevada, where just two casinos are smoke-free and any mention of a smoking ban meets heavy resistance.

More than 20 states have either banned or limited smoking inside casinos. Several states that legalized casinos over the last couple of decades, such as Maryland, launched with non-smoking casino floors. Many states, including Pennsylvania, limited smoking in 2020 as part of reopening plans under COVID-19 health and safety guidelines.

“I would assume that every state has to move closer towards this inevitability but given that the industry is the biggest employer of jobs in Nevada, there appears to be a strong enough fight against this,” Beynon said. “I don’t think the Strip would have that large of an impact, but in some of the older demographic locals markets, I would assume that it could be fairly significant.”

Gaming consultant Andrew Klebanow, along with two colleagues at C3 Gaming, authored a research report that indicated gamblers haven’t altered their habits since the pandemic, even when smoking was eliminated.

The report noted that after the temporary shutdown of the casino industry in 2020, roughly 157 Indian casinos nationwide re-opened as non-smoking properties.

The authors suggested casino customers accepted changes in many areas of the resort industry during COVID, such as the end of daily guest room service and the shuttering of buffets.

“Customers readily understood that mask mandates were incompatible with smoking and accepted the prohibition,” the authors wrote. “What was surprising was that, even after mask mandates were lifted and smoking prohibitions remained in place, customers collectively accepted it. Having successfully pushed smoking out of their buildings at no economic cost, tribal casino operators have resisted the temptation to re-introduce smoking in their properties. ”

Last week, Americans for Nonsmokers’ Rights, which is advocating for the smoking ban legislation in New Jersey, touted the C3 Gaming study and also said the legislation has the backing of more than half of the state’s lawmakers.

The organization came to Las Vegas last year to advocate for a similar ban inside Strip resorts.

“We’re trying to build a grassroots effort here,” Cynthia Hallett, CEO of Americans for Nonsmokers Rights said at the time. “We know it’s a battle and we’re pushing that big stone up the hill. But we don’t believe that hill is that steep anymore. ”

But Klebenow, who is based in Las Vegas and has 40 years of experience in the casino industry, predicted Nevada would be the final state to ban smoking in casinos.

“Individual states that are not dependent on gaming tax revenue for the lion’s share of their budgets will gradually close their smoking loopholes,” Klebanow said in an interview. “The eastern states will flip first, then maybe the midwestern states. If there is a dramatic resurgence in the pandemic, then some Indian casinos will make the move. The second to last state to flip will probably be Mississippi. Nevada will be dead last. ”

A slot machine themed after the singer Madonna is played by customers at the Plaza Hotel & Casino in downtown Las Vegas on June 14, 2022. (Jeff Scheid / The Nevada Independent)

The voter-approved Nevada Clean Indoor Air Act went into effect in December 2006 and prohibited smoking in most indoor public places and businesses except casinos.

When pandemic-related health and safety operating guidelines for casinos were implemented by the Gaming Control Board following the state’s 78-day gaming closure, customers could only remove face masks for eating, drinking and smoking.

MGM Resorts International prohibited smoking inside all areas of Park MGM on the Strip when the company reopened the resort in September 2020. The ban remains in place and Park MGM is the only smoke-free casino on the Strip.

The Fernley Nugget in Lyon County is Nevada’s only other voluntary smoke-free casino.

An MGM Resorts spokesman declined to comment on how the Park’s policy has been accepted by customers and whether the company is exploring smoking bans at any of its other nine Strip hotel-casinos.

“From specialized ventilation and filtration systems to air-handling units located at table games and the bases of gaming devices, the industry continues to utilize the latest innovations for the benefit of employees and guests,” Valentine said.

She added that most casinos in Nevada’s largest casino markets “cater to the diversity of our guests’ preferences by offering both non-smoking and smoking environments.” Valentine said casinos watch for any changes in customer preferences.

A smoking ban inside Nevada casinos would have at least one vocal supporter – Culinary Workers Union Local 226, which counts more than 60,000 members who work in non-gaming areas in Strip and downtown resorts.

Culinary Secretary-Treasurer Ted Pappageorge said in a statement the union would poll hospitality workers to gauge their interest in non-smoking casinos. He said the union “welcomed” the news of Park MGM becoming an entirely smoke-free casino.

“It’s long overdue for an entirely smoke-free casino in Las Vegas, and the Culinary Union is completely supportive,” Pappageorge said.

“Only the most progressive of casino operators have the capacity to rethink the smoking model,” Klebanow said. “A casino could adopt a non-smoking policy and support it with a really innovative smoking lounge. Picture a comfortable room adjacent to the casino with a separate ventilation system, comfortable seating and other amenities where gamblers could take a break. ”

The New Jersey legislation is backed by casino workers and the governor.

Both studies looked at smoking bans that were implemented in other states and local markets in the early-to-mid-2010s and prior to the pandemic, including Illinois, Delaware, New Orleans and West Virginia. DeCree noted that Atlantic City has been the only indoor smoking option for entertainment in New Jersey since a statewide ban went into effect in 2006.

“We would not be surprised if the impact in Atlantic City was at the high end or even greater than indicated by some of these case studies for a variety of reasons,” DeCree wrote in the report. “Atlantic City casinos have likely been out-earning its share of discretionary entertainment among the smoking population for the past 15-plus years. Atlantic City must pull its customers away from more conveniently located gaming options and the absence of smoking would leave many of its higher value smoking customers without reason to make the trip. ”

Klebanow was critical of the Spectrum and CBRE studies because the markets used for comparison had other economic conditions and issues prior to the smoking bans that contributed to gaming revenue declines.

Valentine said the C3 Gaming report, “advocates for government intervention in dictating business decisions rather than consumer choice. Further, it uses select and subjective commentary from other gaming markets, which are incomparable to Nevada’s unique tourism environment, to back up its flawed assumptions. “