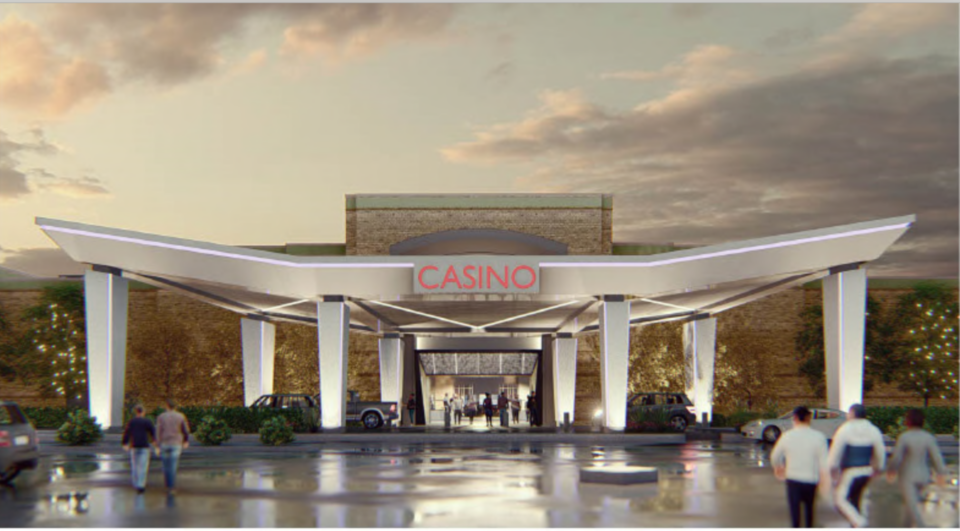 Preliminary design rendering of the exterior of the proposed mini-casino at the Nittany Mall. Image by Nelson Worldwide

The Pennsylvania Gaming Control Board has set a deadline for residents to weigh in on whether a proposed Category 4 casino at the Nittany Mall should move forward.

Written comment will be accepted until 5 pm on June 12, according to a news release on Tuesday.

“In making the decision, the Board believes sufficient time has passed to receive adequate public comment on the matter,” the release stated

The comment period began prior to a public input meeting held last August and remained open well beyond “due to special circumstances related to the Covid-19 pandemic.”

Before the casino can move forward, the PGCB will need to vote on license approval.

No date has been set as of yet for a licensing hearing to be held in Harrisburg for representatives of the casino developer, SC Gaming Op Co. LLC, and the PGCB’s Office of Enforcement Counsel to present any updated evidence and make oral arguments for whether the license should be granted.

That hearing will be open to the public but no additional comment will be received.

If the license is granted, the final step will be to allow approvals for construction and renovations at the former Macy’s location in the mall. College Township Council has already approved land development plans for the project last fall.

Investor and former Penn State trustee Ira Lubert had a winning bid of $ 10 million at a September 2020 auction to apply for Pennsylvania’s fifth Category 4, or mini-casino. In January 2021, Bally’s Corporation announced it had signed an agreement with Lubert to develop the planned $ 123 million mini-casino at the Nittany Mall.

At the time, Bally’s expected that, pending licensing and permit approvals, construction would begin in of 2021 and take about a year to complete.

After the August public meeting at the Penn Stater Hotel and Conference Center, a hearing for the developer presentation and PGCB vote was initially expected to take place in the fall.

In addition to the lengthened public comment period due to COVID, PGCB representatives have previously said they were continuing background work.

They have not indicated that a legal challenge filed by a competing bidder last year has played a role in the delay.

In June 2021, Cordish Companies, which operates as Stadium Casino in Pennsylvania, filed a lawsuit alleging that Lubert, who was eligible to bid because of his ownership interest in Rivers Casino Pittsburgh, violated PGCB rules by subsequently partnering with Bally’s and other individuals who would not be eligible to bid on the casino. Local developer Robert Poole and real estate executive (and newly minted Penn State Board of Trustees member) Richard Sokolov are listed as vice presidents for SC Gaming Op Co.

Cordish contends the alleged violations mean Lubert’s bid should be set aside and Stadium Casino awarded the right to apply for the casino license, or for a new auction to be held.

In responses filed in Commonwealth Court, both Lubert and the PGCB denied any violations of the rules. Lubert maintains that he is the sole owner of SC Gaming.

“Nothing in the Gaming Act precludes SC Gaming from being an applicant for Category 4 licensure so long as Lubert is the sole owner at the time the license is awarded,” PGCB’s response stated.

In the meantime, local opponents of the casino have submitted hundreds of comments to the PGCB and College Township, along with numerous letters to the editors. A petition opposing the casino has garnered more than 1,100 endorsers.

According to Play Pennsylvania, the PGCB has only rejected a mini-casino once. The board did not approve a proposal for Beaver County in 2019 because commissioners did not believe it was economically viable.

The casino would have 750 slot machines, 30 table games and sports betting along with a restaurant and bar with entertainment space and a multi-outlet quick-serve food and beverage area.

Host municipalities and counties receive 2% of a casino’s slot machine revenue and 1% of table game and sports book revenues. A local impact study conducted by a third party as part of the licensing process estimates gaming revenues and taxes would yield $ 1.6 million for College Township in the first year of operation and $ 2 million at stabilization.

The report projects $ 121.6 million in direct and indirect annual economic impact within the College Township economy and $ 164 million within Center County.

If approved, the casino is expected to employ 350 to 400 full-time equivalent positions.

Receive all the latest news and events right to your inbox.