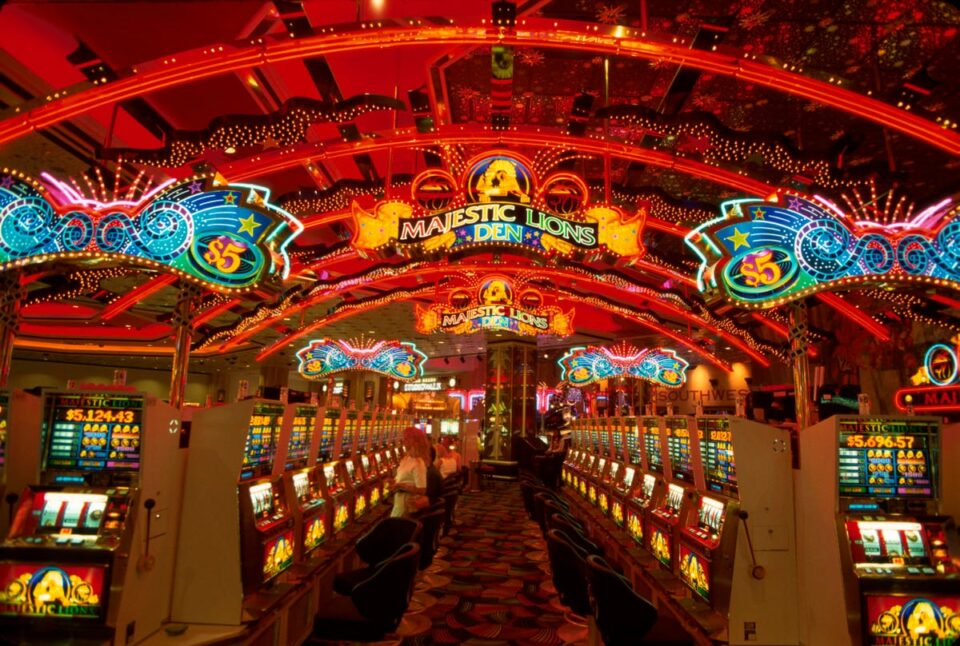 Nevada is on a 14-month record revenue streak thanks to its biggest moneymaker: one-armed bandits. But having too many machines has become a bad bet for gaming companies. Now the Goldilocks principle is helping bring in even more gold.

The Spin Crowd: Slots rank up more than two-thirds of Nevada’s $ 13.4 billion in gaming revenue last year — but the casinos are winning more with fewer of them.

In April, Steve, a 35-year-old filmmaker from Los Angeles, was at the Venetian in Las Vegas playing a Wheel of Fortune slot machine and feeling like a million bucks. He was taking $ 7 spins and after an hour of sinking $ 500 into the machine, Steve got a gold spin bonus and won $ 700. The next day, he was still feeling lucky and found what he thought was a “hot” machine. He fed it $ 200 and lost it all within minutes. He ran to the ATM to get another $ 200, lost again, and finally walked away — after losing $ 1,400.

To professional sports bettor and veteran advantage game player who goes by the nom de casino Captain Jack Andrews, what happened to Steve is textbook. “They will all lose their money,” Andrews says. “It’s just about how quickly they will lose.”

After all, slot machines have long been the cash cow of casinos — accounting for nearly 69% of Nevada’s $ 13.4 billion in gaming revenue last year — but something unexpected happened when Las Vegas went into lockdown in early 2020: When the city reopened after 78 days , casinos tried their luck on a new strategy. There were fewer slots on the floor, but the house was making more money. The gamble has continued to paid off. Between March 2021 and April 2022, Nevada went on a 14-month streak collecting more than $ 1 billion in gaming revenue from the state’s casinos — a state record. The leader in revenue drivers? Slot machines.

“Slot win is on this torrid pace,” says Michael Lawton, a senior research analyst for the Nevada Gaming Control Board. One-armed bandits generated $ 9.2 billion last year across the Silver State — another record for Nevada and a 16.4% increase over $ 7.9 billion slots reaped in 2019. Between 2010 and 2019, slots accounted for 63.3% of total state win.

As was the case in many industries, casinos reevaluated everything about their businesses during the Covid shutdowns. And with slot machines, operators found a new sweet spot. “It was a great reset,” says Lawton. In 2019, Nevada had an average of 140,554 slot machines. A month before the pandemic, in February 2020, there were 139,753 machines. By 2021, the state average was down to 119,000. And in February 2022, the state’s casinos seemed to find its magic number using the Goldilocks principle — and, for now, 122,247 slot machines is just right.

Despite having about 50,000 fewer machines in 2021 compared to 2010, Nevada’s average win per slot jumped 95% over the same period, from $ 108.88 to $ 212.72. (One caveat is that during the pandemic, Nevada casinos added electronic table games — blackjack, craps and roulette with virtual dealers — to its slot machine revenue reports.) This jump isn’t due to inflation — casinos can also recalibrate how its machines pay out.

All You Need Is Luck: Slots are now designed to be far more addictive than when the Beatles took one for a spin in 1964. And the Beatles could afford to lose a few pounds.

While slots have some of the best odds in a casino, sharp gamblers understand that the pay rate for them means very little. By regulation, a Nevada casino must have a theoretical payout of at least 75% —meaning for every $ 1 wagered, a player can expect to make back at least 75 cents on average — but the average rate is closer to the low 90% range. So while the machine is theoretically paying out more money, the odds are always in the house’s favor.

“There’s no such thing as a hot machine or a cold machine — it’s all variance,” says Andrews, who is also the cofounder of Unabated, which sells tools and resources to sports bettors. “It’s just odds bearing themselves out; there’s always going to be an outlier. The worm always turns. ”

Most slots in Nevada are calibrated between an 85% and 98% payout rate, which is why players always talk about machines that are “looser” or “tighter.” (Although, the idea of ​​a dial that can be quickly turned is a fallacy — recalibration is a multi-hour process that requires a computer technician and reporting to the state.) Another factor that helped boost slot revenue is that the average payback rate in the Silver State got tighter, not looser, according to the Nevada Gaming Control Board. The concept of loose slots, then, is more of a marketing gimmick used by casinos to draw in customers than a scientific reality, but the average payout rate in 2018 was 93.15%, meaning for every $ 10 a player put in a machine they theoretically got $ 9.31 back. In 2021, the average rate was 92%.

In addition to lower payouts, it’s logical to think that if a casino wants to make more money, it should add more machines. But the opposite has proven to be true. The counterintuitive logic is all about odds. “The less amount of slot machines a casino has on a floor, the higher the net-win percentage goes up,” explains Nick Antenucci, a lawyer and lobbyist at Davidoff Hutcher & Citron who has worked in New York’s gaming industry for years. “It’s more about math than it has to do with gaming. Less machines, less odds for the players. ”

Casinos, of course, have known this secret for years. And pulling slots from the floor has long been a lever the house can use when they need to increase revenue. In 2019, two New York State casinos successfully petitioned the New York Gaming Authority to cut the number of slot machines after struggling to hit revenue projections, the Democrat and Chronicle reported at the time.

Resorts World Catskills, which is two hours north of New York City, opened in 2018 with a requirement to have 2,150 slot machines on its 90,000-square-foot floor. But after a tough first year, the New York State Gaming Commission agreed to cut the number of required slots to 1,600 — a 26% drop. Tioga Downs, a casino along the Susquehanna River on the New York side of the Pennsylvania border, got similar approval to remove 5.3% of its machines.

More Bang For Your Luck

Three Things Every Player Should Know About Slots

Newer multi-line machines give the sense of winning by giving back small amounts of the initial wager, or what’s called “losses disguised as wins.”

Today’s slots typically give players slimmer odds at winning big jackpots, but they elongate the time it takes to lose everything.

There is a cumulative nature to a slot machine’s hold, according to author Natasha Dow Schüll. A 90% payback percentage doesn’t mean a player will only lose $ 10 if they bet $ 100. It means they will lose 10% each bet and gradually lose it all.

The Goldilocks principle has also helped the state’s four Vegas-style casinos rebound from the pandemic. According to data from the New York State Gaming Commission, slot machines in the Empire State generated $ 412.7 million with 5,385 units between April 2019 to March 2020. After casinos pulled about 300 machines, revenue increased 13% to $ 467 million between April 2021 and March 2022. The average daily win per machine also jumped 19.4% from prepandemic levels.

Hector Fernandez, the CEO of gaming at Australia-based Aristocrat, a slot machine manufacturer and digital casino game developer that makes 10 out of the top 25 top-performing slot games, says the company’s US division went from a $ 1.9 billion (annual revenue) operation to zero overnight in March 2020. But when casinos finally reopened, the economics of the casino floor started changing in favor of slot manufacturers.

Especially in Las Vegas, casinos had to cut major loss leaders coming out of lockdown, including big-name DJs, all-you-can-eat buffets, and restaurants with star chefs. Casinos also had to change the floor layout due to social distancing measures, which hurt the profitability of its table games. (Blackjack tables that once had six seats, for instance, were reduced to three players, which flipped the games from a winning proposition for the house to a losing one when you include labor costs.) With fewer entertainment options, slots pulled double duty and helped buoy gaming revenue. “In a weird way, it helped Vegas go back to its core roots,” says Fernandez. “A slot product on the floor is the most profitable thing a casino can operate, far more profitable than anything else.”

The days of hitting three cherries as machines jingle and jangle while spitting out a mountain of quarters are long gone. Today’s machines are more akin to elaborate video games while others are licensed from popular movies and TV shows — including The Godfather, The Wizard of Oz, The Simpsons, Game of Thrones and Crazy Rich Asians. And the secret to successful games today is immersion — keeping a player in the seat as long as possible with video clips on giant screens, loads of bonus reels and oversize, ergonomic chairs built for comfort.

Game On: Newer machines are based on popular movies or TV shows and keep players addicted with video clips and comfortable seats.

The slot industry’s ultimate goal is to increase a metric referred to as “time on device.” According to Natasha Dow Schüll, an associate professor at New York University and author of the book Addiction By Design: Machine Gambling in Las Vegas, a darker force is also at play — there has been a decades-long drive to make slots more addicting. “I don’t think there’s an overt intention to addict people, but there’s an overt intention to increase revenue,” says Schüll. “And the reason for being for these machines is to make people play longer — and more. It’s not sensationalist to say these machines treat every person who sits down as someone who can be coaxed to play longer and more and not stop. And what is that? It’s an addict. They want someone who doesn’t leave. ”

Schüll notes that every single detail about slots — from the design to the algorithm to the audiovisuals— “is in the service of time on device and revenue extraction.” The new slot machines have become so sophisticated and able to accommodate the range of human desires that hitting the jackpot, for many players, is often beside the point. What people are really getting by putting their hard-earned money into a slot machine today is an escape.

For Schüll, hunting for a “loose” slot is yet another sucker’s game. The higher the payback rate, the more time a person spends playing, which means they will eventually lose more money. “A looser machine will bring more revenue over time,” she says. “Time is the element. It’s Costco gaming: Profit is from volume, not from price. ”

So the next time you see a casino billboard advertising the “loosest slots,” remember what that actually means: Give us your time and your money. In exchange, you can try your luck on the irrational belief that you could become rich while sitting in a big, comfy chair.

FIFA associations are calling for an investigation into the prize pools