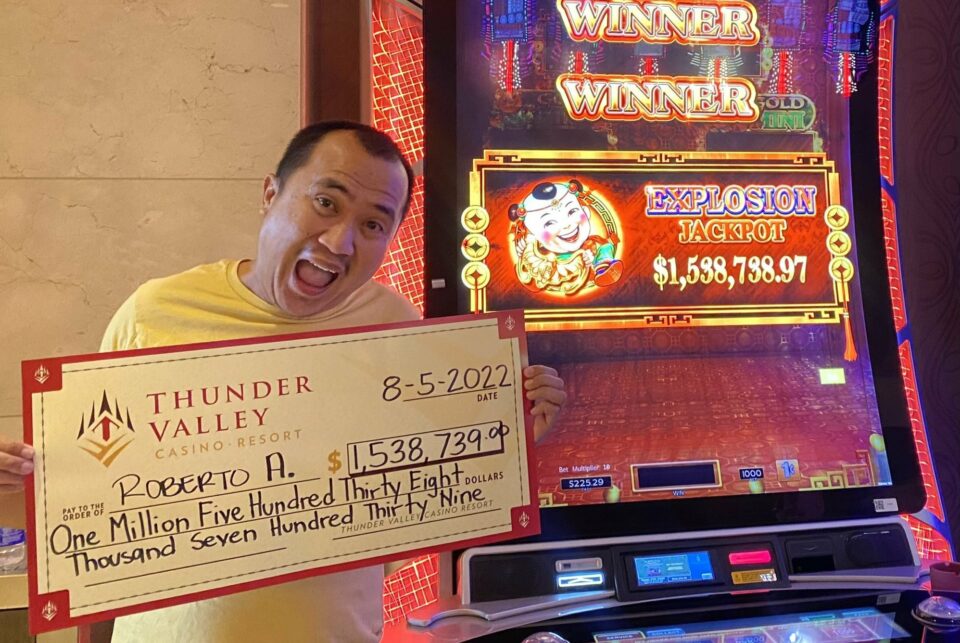 A slot machine player at California’s Thunder Valley Casino Resort won more than $1.5 million on Friday. The lucky player at the Lincoln, Calif. gaming property was identified as Roberto Arcueno.

Roberto Arcueno shows the facsimile $1.5 million check won next to the winning slot machine. It was won on the “Dancing Drums Explosion” slot with a progressive jackpot. (Image: Twitter)

The total payout was $1,538,738.97, KTXL, a local TV station, reported. The entry price was one cent, the report adds. It was won on the Dancing Drums Explosion slot with a progressive jackpot, the casino said in a statement.

We are thrilled that Mr. Arcueno, who is one of our Platinum guests, hit such a major jackpot,” Thunder Valley General Manager Dawn Clayton said in a statement. “Every slot machine in the casino is wired into our exciting Thunder Strike Jackpot, which can strike on any slot at any time.”

Last month, one lucky slot machine player won over $1.2 million at Sunset Station Casino in Henderson, Nev. The instant millionaire made a $7 bet at the Station Casinos property.

The jackpot totaled $1,262,132.28. The player got lucky on just their third spin on a Wheel of Fortune progressive slot.

The mystery player chose not to release his or her name. He or she is a local, Station Casinos revealed in a statement. It was announced that the person is also a member of Boarding Pass. That is a rewards club offered by Station Casinos.

In March, dash-cam and surveillance videos were released. They show the escalating events before a deputy shot a driver last year at Thunder Valley Casino Resort.

He was in a parked SUV in the casino’s parking lot but then sped away with the deputy leaning into the driver’s door.

The SUV dragged the Placer County deputy about 150 yards after the driver hit the gas during the Jan. 11 confrontation in the casino’s east parking lot. The deputy, fearing for his safety, then shot the driver.

The suspect, Albert Savala III, 30, of Sacramento, Calif., was wounded and required treatment at a local hospital. He was shot three times in both arms and chest while he had his hands in the air, according to a GoFundMe website organized by his family.

He was later arrested for assault with a deadly weapon, evading, possessing a firearm, destruction of evidence, and conspiracy. His bond was set at $200,000.

Because it involved shooting, the incident was reviewed by the Placer County District Attorney’s Office. They concluded that “The deputy’s use of force was reasonable and within the bounds of the law,” Angela Musallam, a spokeswoman for the Placer County Sheriff’s Office, told Casino.org in March.

How to Manage Your Casino Bankroll

A guide to Las Vegas, from artsy neighborhoods to the neon-lit Strip