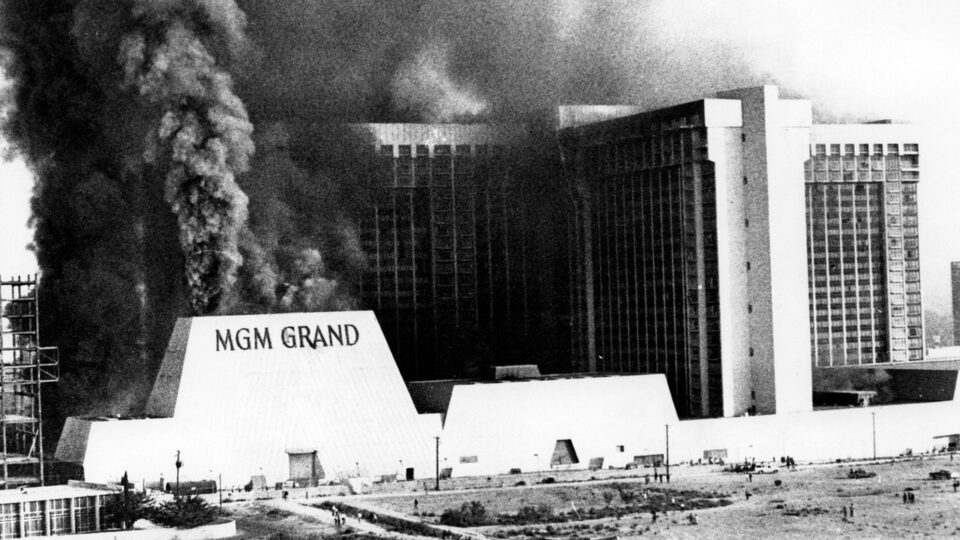 A common myth surrounds the MGM Grand fire on Nov. 21, 1980. But with this myth, the truth is more disturbing than the fiction obscuring it.

A tragically avoidable fire races through the MGM Grand hotel in Las Vegas on Nov. 21, 1980. Look at the hotel in this photo. Does it look familiar to you? It should, and not because it was once the MGM Grand. (Image: Las Vegas Sun)

The tragedy claimed the lives of 87 people and changed fire codes throughout Nevada and the nation.

Only the Winecoff Hotel fire, which killed 119 on Dec. 7, 1946, in downtown Atlanta, was worse. Luckily, helicopters from nearby Nellis Air Force Base could snatch more than 1,000 people from the roof of the MGM, or the death toll would have broken that record.

Many people believe that the MGM Grand was demolished after the devastating fire, either because of extensive fire damage or because the building had too much bad luck. This myth is so pervasive that it even appeared as a fact in the 2009 edition of Frommer’s Las Vegas.

The truth is there was fire damage to the building, but it was contained to the casino and first floor and did not cause serious structural damage. There was bad juju, too, but it didn’t cause MGM to implode and rebuild the property.

The original MGM wasn’t demolished at all. Instead, the fire damage was repaired, and the building was sold to Bally’s five years later. During the sale, Bally’s changed the hotel to the well-known Bally’s Las Vegas. A new MGM Grand (the one you know today with mirrored windows and the iconic lion statue) opened in 1993, south of the original MGM.

The original hotel tower where most deaths occurred continues to operate today.

At 7 am on Nov. 21, 1980, faulty wiring in a deli at the east end of the casino sparked a small fire. The deli wasn’t open yet; a casino worker noticed the smoke and called security. I searched frantically for an extinguisher but couldn’t locate one. At the time, there were no automatic sprinklers in that part of the casino.

The fire began climbing the restaurant wall at 17 feet per second. Four minutes after exiting the deli, it hit the lobby’s front doors and blew out its glass. Before firefighters could get it under control, it converted all stairwells, elevator shafts, and air-conditioning ducts into chimneys.

More than 60 of the 87 victims died on floors 19-24 of the hotel tower, half in their rooms, from inhaling the thick black smoke and carbon monoxide that poured through the a/c ducts and accumulated into a dense cloud. Many of the victims were probably still asleep in their beds.

In Legacy Up in Smoke

The MGM Grand reopened eight months after the fire with automatic sprinklers and a fire alarm system throughout the property. (Thanks to the fire, these were now legally required.) As part of a $50 million remodel, a second 26-story tower was added later in 1981. But visitation slumped because of bad publicity from the fire and years of ensuing litigation.

An investigation into the fire yielded many disturbing details. For instance, installing the automatic sprinklers that the Las Vegas Fire Marshal recommended but not yet required by law would have added only $200,000 to the $106 million cost to build the MGM Grand from 1972 to 73. Yet the hotel refused, and the Clark County Building Department took its side, stating that because the building operated 24/7, automatic sprinklers were not required throughout the premises.

More than 1,350 legal claims resulted from the fire’s deaths and injuries, and the MGM Grand eventually agreed to pay $223 million to settle them. Las Vegas, at the time, did not have enough firms to handle all the litigation.

Tired of operating this gigantic monument to failure and death, the MGM Grand sold the hotel and the MGM Grand Reno to pinball and slot machine maker Bally Manufacturing in April 1986.

Rising From the Ashes

Quietly, MGM Grand owner Kirk Kerkorian began acquiring the property to build a new MGM Grand a mile south of the old one. It opened in 1993 and still operates today. Meanwhile, Bally’s has changed hands several times. Hilton Hotels acquired the property in 1996 and spun its casino resorts division into Park Place Entertainment, which was renamed Caesars Entertainment and acquired by Harrah’s Entertainment in 2005.

The original MGM (left) was sold to Bally’s (middle) after the 1980 fire. The new MGM (right) was built nearby. (Image: Casino.org)

Now, the old MGM Grand is getting rebranded again. Its official new name is the Horseshoe. Caesars renamed it to play up its role, which began this May, as the new host of the World Series of Poker. (Binion’s Horseshoe was the original name of Binion’s Gambling Hall in downtown Las Vegas, which launched the WSOP in 1970.)

Meanwhile, in a giant session of Strip do-si-do, the Bally’s name is expected to migrate a mile southward and land on the Tropicana, which Bally’s Corporation purchased from Gaming and Leisure Properties for $308 million this year.

Busting the myth of the imploded MGM Grand reveals a disturbing truth. In the 42 years since the fire, extending forward to however many more years the old MGM Grand will still operate, hundreds of thousands of guests will have slept in the very same upper-floor rooms where dozens of poor souls died of asphyxiation.

Look for “Vegas Myths Busted” every Friday on Casino.org.

The best casinos for football fans

The best casinos for football fans

Technology: How is livestream affecting some industries?