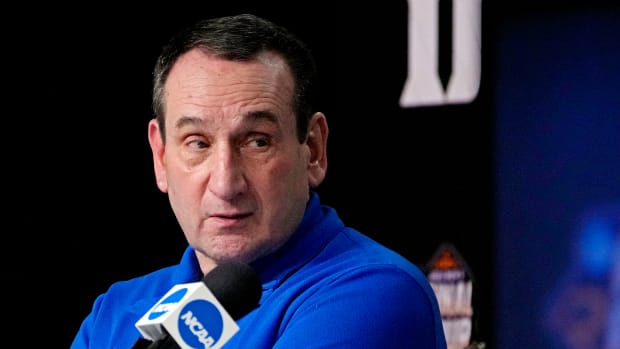 Retired Duke basketball head coach Mike Krzyzewski might not receive the privacy he desires these days, but it looks as though he’s having fun just the same.

On Saturday afternoon, a funny 22-second video on social media of Coach K minding his own business at a slot machine began to go viral after the Bleacher Report betting account tweeted the clip.

When Coach K caught a fellow casino patron videotaping him, it appeared as if the 75-year-old turned his head to give a bit of a stink-eye glance while the “cameraman” quickly rotated his phone’s face to the slot machine in front. of him. The voice in the video then asked, “Any luck so far?”

There’s no audible response from Coach K in the video, and that is when it ends.

According to the video’s caption, the Hall of Famer was “doing $ 100 spins” with “no luck so far.”

Maybe his luck will change. What isn’t likely to change is the number of phones sneakily pointed in his direction every time he’s in public.

A new era of Duke basketball

Now, the 34-year-old Jon Scheyer has taken over the reins in Durham. He and his 2022-23 Blue Devils begin their campaign at Cameron Indoor Stadium on Nov. 7 against Jacksonville.

Coach K recently reiterated that he has no plans to attend Duke basketball home games.

Pa. casino revenue dips in May, but sports betting up at Live! Pittsburgh Casino