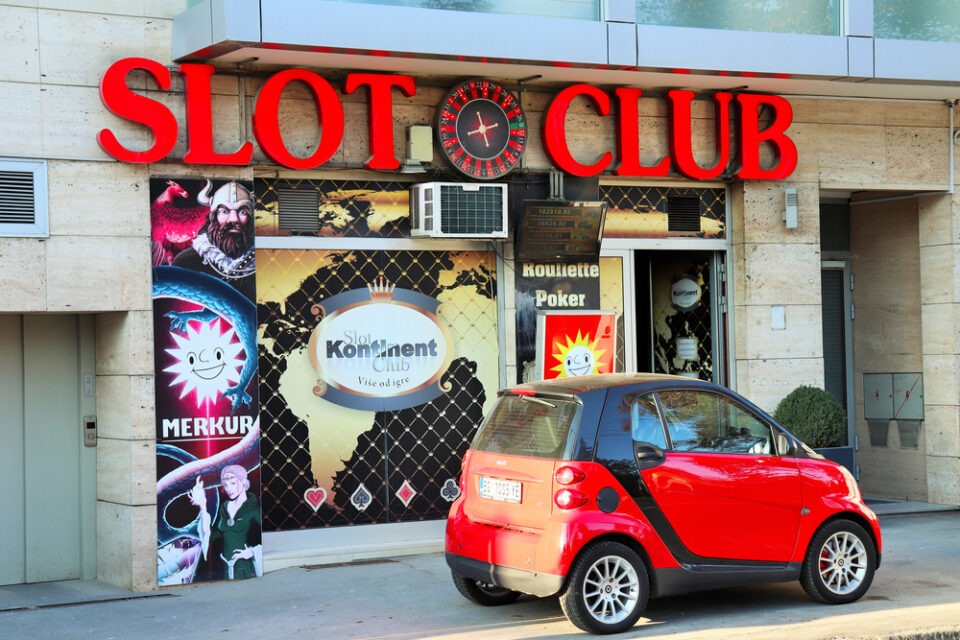 The entrance to an auction room in Belgrade – © Smolll/Shutterstock

Serbia is at the top of the European ranking for betting density per number of inhabitants and the main clients are young people between 18 and 25 years old. With the risk of falling into a spiral of dependence and debt

In the city of Novi Sad, one of the three European Capitals of Culture 2022, there are over one hundred and thirty theaters, a decidedly disproportionate number compared to the theaters (only three) and cultural centers (eight) present in the city. Walking down the streets of Novi Sad at every step I hit a casino and bet, which seem to multiply like mushrooms every day that passes. Entry to the gambling hall is restricted to children under the age of 18, but it is not rare to see minors sitting at the tables outside this type of venue to consume drinks offered at cheap prices. Sometimes I even manage to get in, spending the entire bill to play roulette and slot machines.

According to the data that journalists from the Voice portal have obtained from the Serbian Business Registry Agency, only in the urban center of Novi Sad, without counting the peripheral districts, there are 131 gambling halls. Novi Sad is the second largest city in Serbia, with 220 thousand inhabitants (according to the 2011 census), so there is one room for every 1700 inhabitants.

The one in Novi Sad is not an isolated case, however: casinos continue to multiply throughout the country, including remote villages, confirming the fact that the betting business is going big.

According to the World Health Organization (WHO), in 2008, Serbia ranked second in Europe for the number of casinos per inhabitant, with over 300,000 gambling addicts, mostly between the ages of 18 and 25.

“In that ranking dating back to 2008, Serbia was preceded only by Bosnia and Herzegovina, but if an updated ranking were to be drawn up, I believe that Serbia would occupy the first place”, says Jelena Manojlović of the SOS Center for the treatment and prevention of gambling pathological gambling

It comes naturally to ask: what are the reasons behind the expansion of gambling in a relatively small country like Serbia? According to some psychologists interviewed by the Voice, to be driven towards gambling are above all the citizens of countries afflicted with serious problems linked to poverty, like Serbia.

As the number of casinos and gambling halls increased in Serbia, the relevant laws were modified. Two years ago, a new law was approved on gambling aimed, inter alia, at protecting major and minors from the negative effects of gambling. The law stipulates that the casino and the gambling hall cannot be located less than 200 meters from the educational institutions (elementary and superior schools).

Il rispetto della distanza provided by the law is not enough, however, to keep young people alive for long periods of time. For example, within a radius of 500 meters from the Technical High School in Novi Sad, there are ten betting shops, and it is therefore inevitable – as a school teacher explains – that many students, mostly commuters, on their way to school will be hit in various sale bets.

“Many of my friends frequent the gambling hall before and after school, but also during recreation”, explains Marko (fantasy name), a final year student at the Scuola superiore tecnica di Novi Sad, adding that some of his classmates The school takes the game very seriously. “I mainly play alle slot machine or alla roulette. So che alcuni are heavily indebted because of gambling”.

A reality confirmed by the testimony of Aleksandar, 17 years old, a student at one of the high schools in Novi Sad, according to whom even minors frequent the betting room. “To be able to enter, they often use a false identity document or if they are accompanied by a major person. Chi ha soldi sufficient gioca alla roulette, chi invece di soldi ne ha pochi fa scommesse sportive oppure gioca a slot o Lucky Six. The problems start when you lose and then you are forced to borrow money from the strozzi,” affirms Aleksandar.

“The number of young people addicted to gambling increases year by year”, explains Jelena Manojlović from the SOS Center, and adds: “When I started working, a fortnight ago, the average age of the patients ranged between 35 and 45 years Today, all the people who come to our center are under the age of thirty and most are young people between the ages of 17 and 25”.

The data that emerged from a research on gambling among young people in Serbia, conducted by Jelena Manojlović in 2019, do nothing but confirm the situation illustrated by Marko and Aleksandar.

Those who come to the betting room are not obliged to play, many people go there simply to pass the time or to watch a football match, also because there is always a stadium atmosphere and the prices of the drinks are lower than the bar and altri locali: a caffè costs 120 dinars (about one euro), while a beer, così come un succo di frutta, costs 150 dinars (about 1.30 euros).

At the beginning of 2015, a boy in his thirties met with some friends in a betting room that he occasionally frequented to watch a game or play billiards. At a certain point the boy was approached by a stranger, who told him that he was a friend of his father, as well as a betting expert and that he had received information about the probable results of some games. Then he asked the boy to lend him money to bet on a game, promising that, if he won, he would share the winnings with him. Un discorso con cui, in soli two mesi, the man managed to extort from the boy more than 390 thousand dinars (about 3300 euros). In 2019 this case finally had a judicial epilogue.

Gambling requires a constant flow of money. Con aumento della stake gioco aumentano le vincitano, ma aneche le pertide. When a quick gain turns into an even faster loss and the wallet is empty, you are forced to resort to strozzini. Debt towards creditors is the main reason why people dependent on gambling decide to turn to a specialist. And young people usually come close to help only because they spin from their parents.

“Most people don’t seek help on their own initiative and don’t think they have a problem until they find themselves in debt,” explains psychologist Isidora Morokvašić, who helps people affected by various psychological dependencies. Jelena Manojlović also confirms this. “Many people, especially young people, have decided to turn to our center only after finding themselves forced to face different problems related to debt”.

Have you thought about a subscription to OBC Transeuropa? You will support our work and receive articles in preview and more content. Subscribe to OBCT!

And comments, as far as possible, are checked by our staff before they are made public. The time required for this operation can be variable. Go to our policy